How to Use WiFi Router in Bedroom Safely?

Yes, you can even use a wifi router in the bedroom safely without causing any physical or mental health issues. The Internet is not the problem, the problem is the Magnetic Radio Frequency produced by the wifi router. The best solution is you can simply turn off the router while sleeping.

Another simple solution is to use a WiFi Router Guard or Bed Canopy to lessen the EMF emitted by the router. It can block the emitted RF radiation up to 90%. Don’t panic, it will not hamper your internet speed and reliable connectivity. 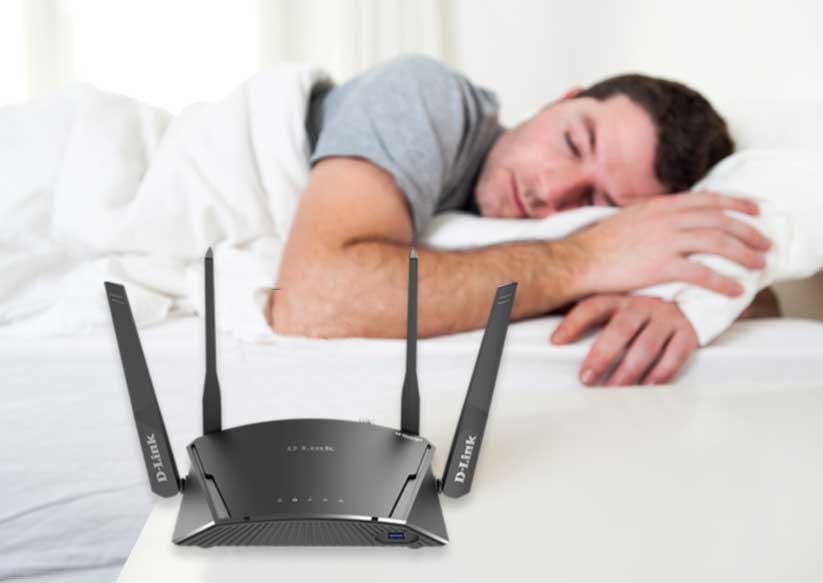 Why a WiFi Router in the Bedroom

A wifi router next to the bed can ensure better connectivity and internet speed while using the internet lying on the bed. Most of the electronic devices in the bedroom now use the internet such as smart tv, mobile phone, laptop, desktop, smart watch, smart sound devices, etc. In order to ensure a better performance, a wifi box in the bedroom is a must.

Father’s work from home, Children’s study, Mother’s daily activities are now fully dependent on the internet. Sometimes, not having enough rooms/spaces in the home and inadequate electronic plugs may be the cause to set up a wifi router near bed.

Should I Avoid WiFi Routers in Bedroom?

Like two sides of a coin, technology always comes with a blessing and a curse. And it seems wifi routers are also included in that list. In a relatively short period of time wifi routers have become an essential part of our lives and we can’t imagine our lives without it. So today I am going to talk about the potential risk it may carry for your health in close proximity and how to minimize that, because let’s be honest, giving up on it is not an option.

How a WiFi Router Works

WiFi routers use Radio Frequency energy to connect to the internet which is a form of electromagnetic radiation. Whether it’s a high powered or low powered router, all wifi routers emit High Frequency Radio Waves. Now, this is the same type of radio wave that cell phones and other wireless electronics emit. This electromagnetic field is in short referred to as EMF. 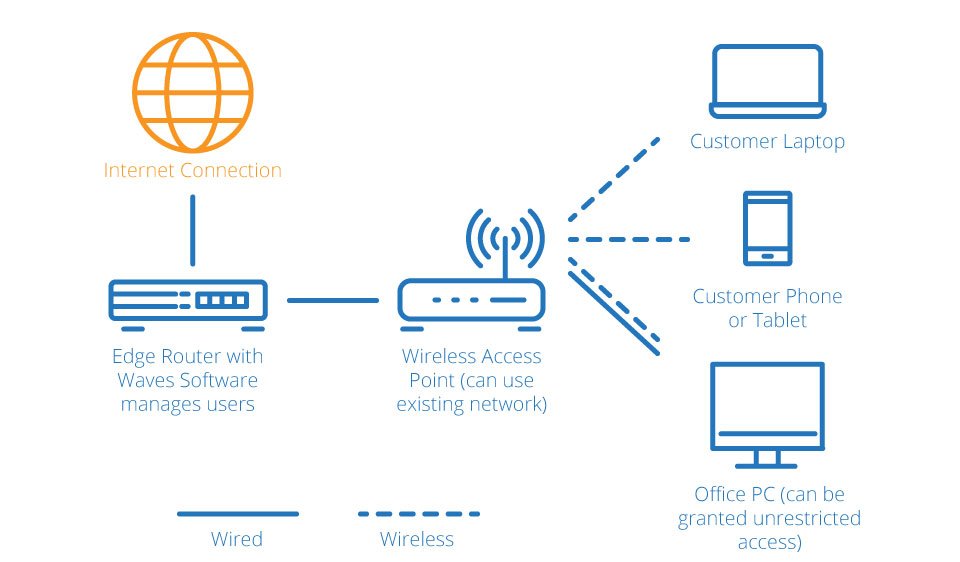 EMF is categorized in three parts:

Different techs use different EMF depending on the service they provide. The WiFi routers use radiofrequency radiation that is also known as microwave radiation.

# How Much Harmful a WiFi Router Can be?

The RF radiation is a comparatively low energy wave and is theoretically a form of non-ionizing radiation. Previously it was believed that being a low energy, it is not harmful to our health. However, after long term research it has been declared by the World Health Organization (WHO) that lasting close proximity exposure to RF radiation emitted from wifi routers can be quite harmful to the human body. This health risk is amplified if you have the router in your bedroom and sleep next to it. 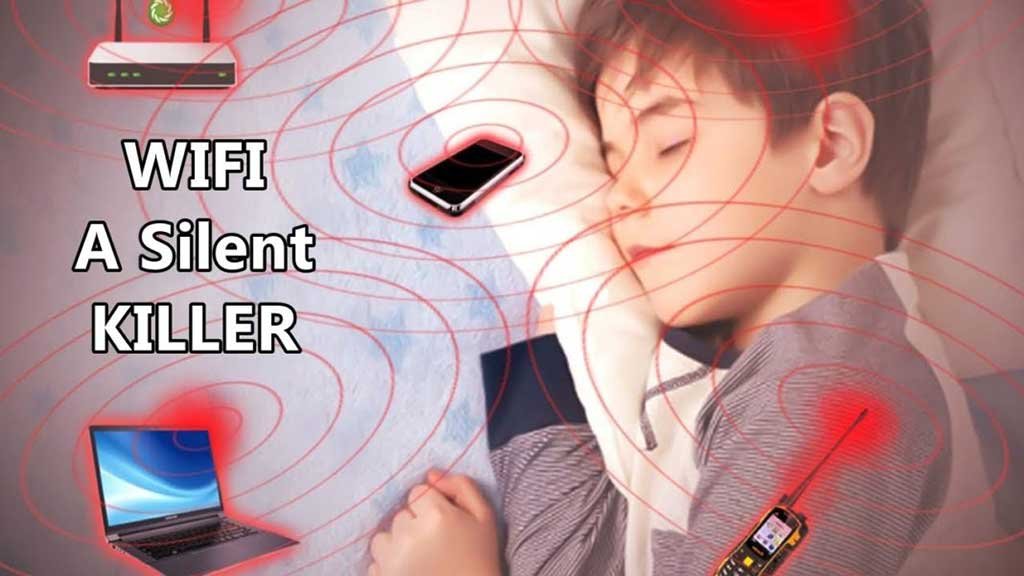 01. WiFi Router in Bedroom Affects Your Sleep (How)

If you’re standing right in front of it, the EMF radiation from a wifi router might go as high as 400 watts pcs. The further you stand from it, the lower this exposure level becomes. But even a distance of 2 meters is no higher than the recommended level of radiation exposure for the human body. So surely sleeping for about 8 hours in such close proximity to the wifi router can’t be good for our health. 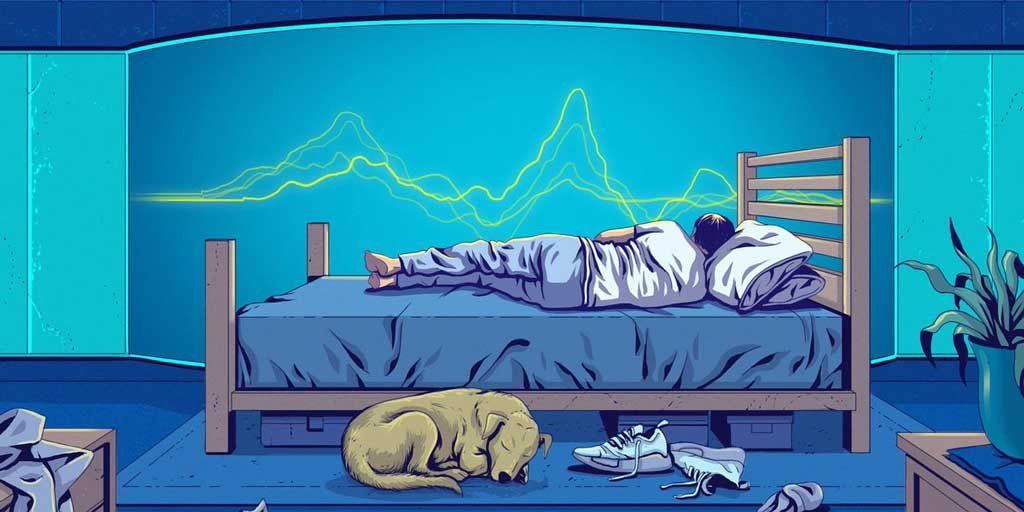 Some of the negative health impacts to this are insomnia, headaches and extreme tiredness. And as we know irregular sleeping patterns can be drastic in the long run. The best solution is to not have the wifi router in your bedroom, but if you must, you can make sure to turn it off while you’re sleeping. While that doesn’t take care of the whole problem, it surely lessens the health risk by a long margin. 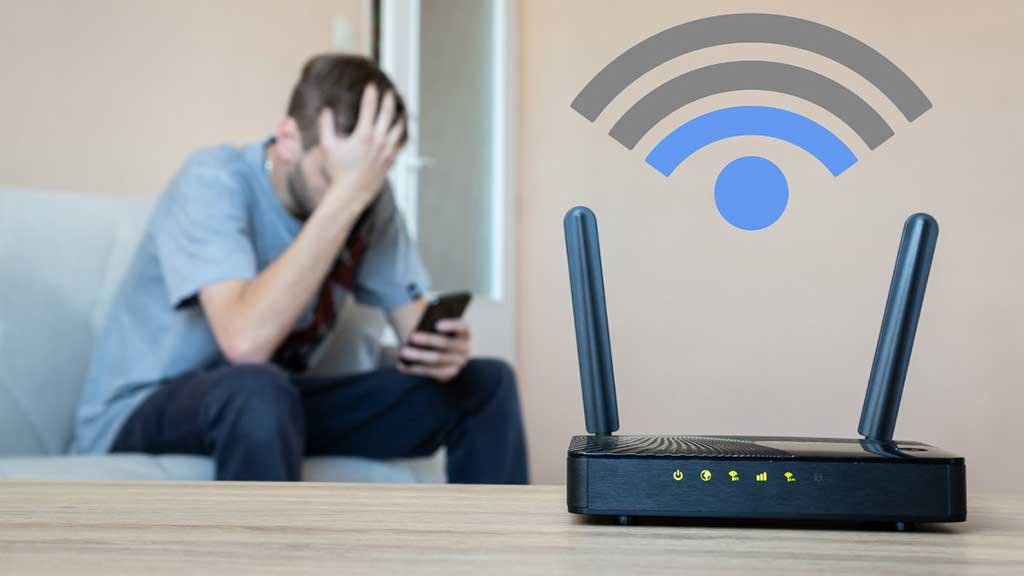 03. WiFi Router in Bedroom Can Do Cell Damage

Irregular sleep patterns are just one of the problems in a long list. While there hasn’t been an opportunity for long term studies to define the full spectrum of the problems, cell damage in the human body is reportedly one of them. Now, as we know, cell damage might at some point lead to cancer. But that might even take decades, so there’s no reason for immediate panic. 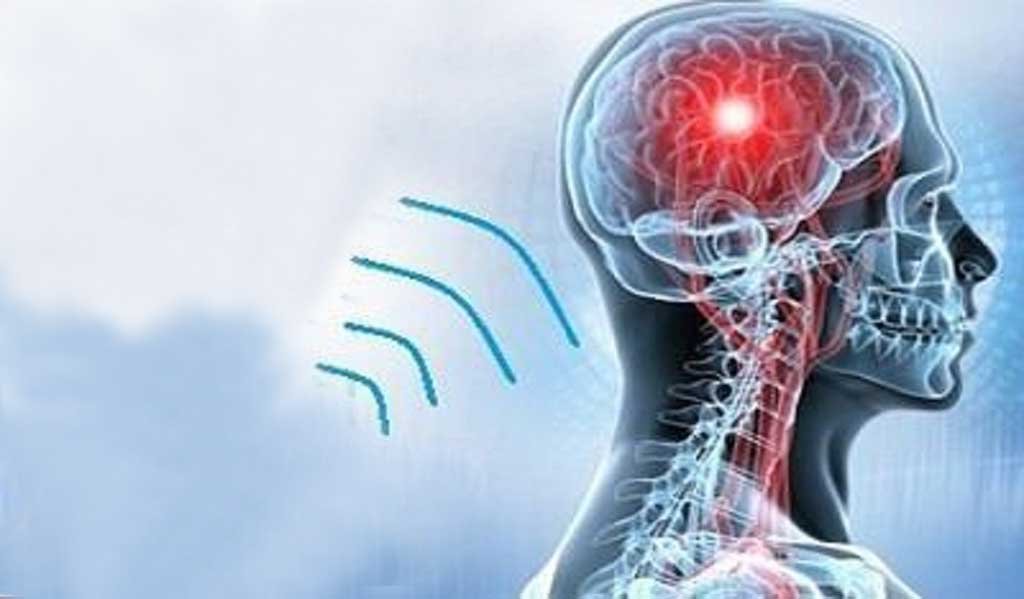 EMF radiation of Wi-Fi router is one of the reasons for Alzheimer’s Disease. I believe you face this issue many times in your day-to-day activities. Sometimes we forget a simple thing to do or to recall. For example, you are in front of your very close friend but you cannot recall his name instantly. This is called the brain fog people are facing rapidly rather than the ancient time. Using Do List and Notes are some of the proof of this disease. 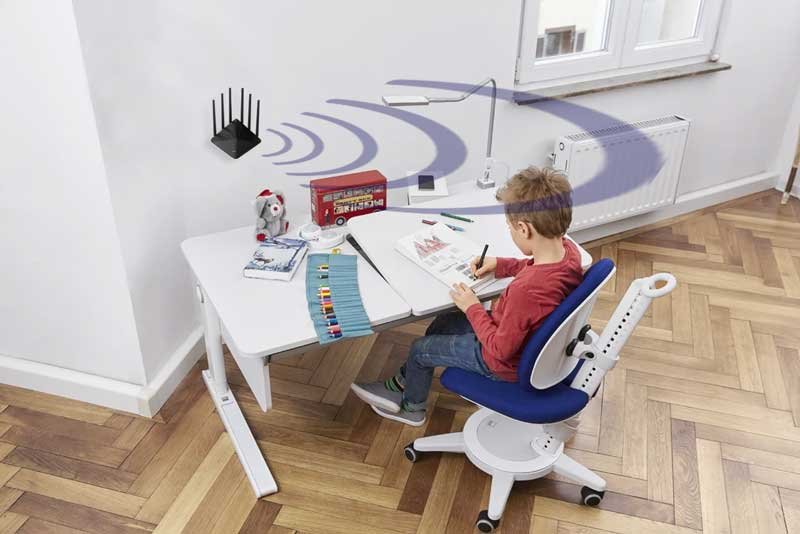 Reading from newspapers and reading from an online screen is totally different. Research says people lose concentration more frequently in EMF radiation. One should keep his children away from the router radiation field while studying. 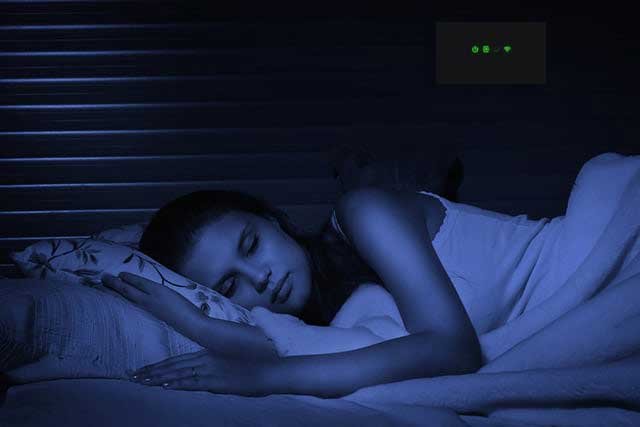 Tinnitus is one kind of noise emitted from WiFi routers that cannot be heard as a regular sound. But it has a huge impact while the brain is sleeping. Also, the LED blinking in the bedroom can cause harm in sleep that results in irregular sleeping time. 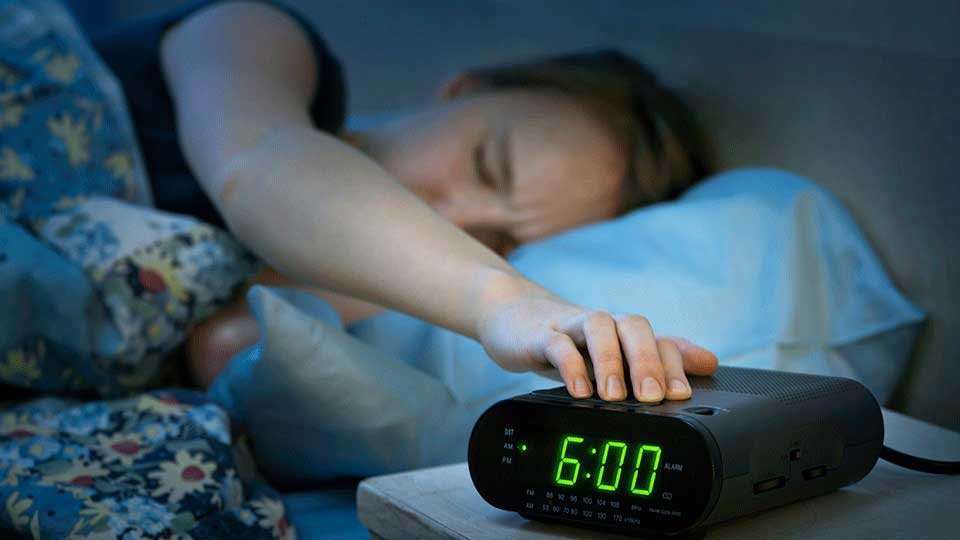 If you like to grow a regular sleeping behavior in your brain, I like to recommend not to set up a WiFi router in the bedroom. Human brain behaves so friendly in good nature. You may find people on the road or countryside have a good sleeping behavior than the enriched places.

# How to Save Yourself from WiFi Router EMF Radiation

However, the best solution to avoid all that is to not have the wifi router in your bedroom. An average wifi router can deliver a strong internet connection up to 60 meters distance in all directions. While data transmission amount can be limited, if you’re using a 5g router with improved frequency range the signal can easily be carried throughout your home. The 5g routers aren’t limited by obstructions such as walls and such. 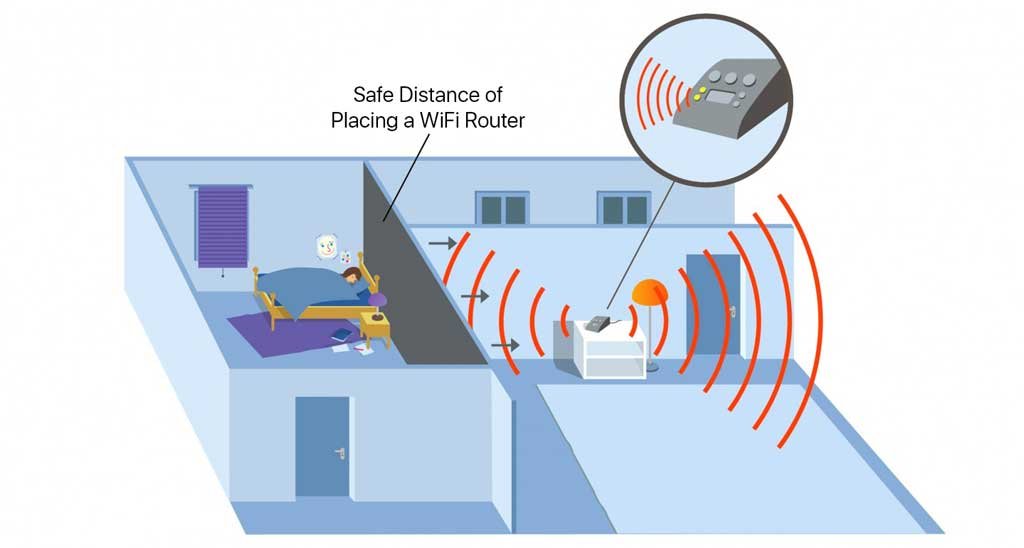 01. Safe Distance of Placing a WiFi Router in Bedroom

The recommended distance for a wifi router is at the very least, 5 meters. But since it has to be located somewhere in the house, it’s better to put it somewhere you spend the least amount of time. It is especially suggested to keep it as far as possible from children and EMF radiation-sensitive people. 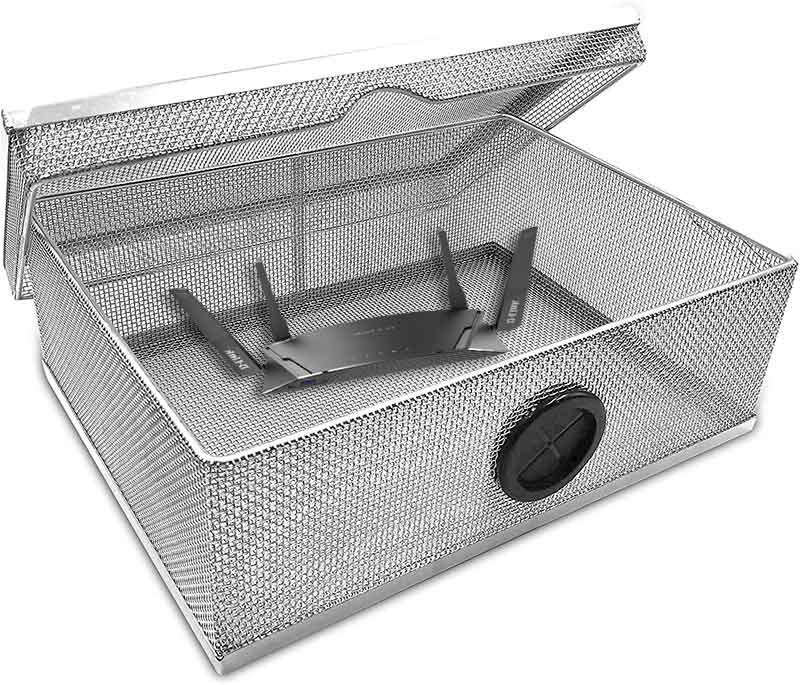 There are other steps you can take in order to lessen the health risks of EMF radiation. One of the best options is to get a wifi router guard. A wifi router guard is a simple handy device you can put on your router that can block the emitted RF radiation up to 90%. Rest assured it will not affect your wifi signal or block your internet connection depending on your router range. 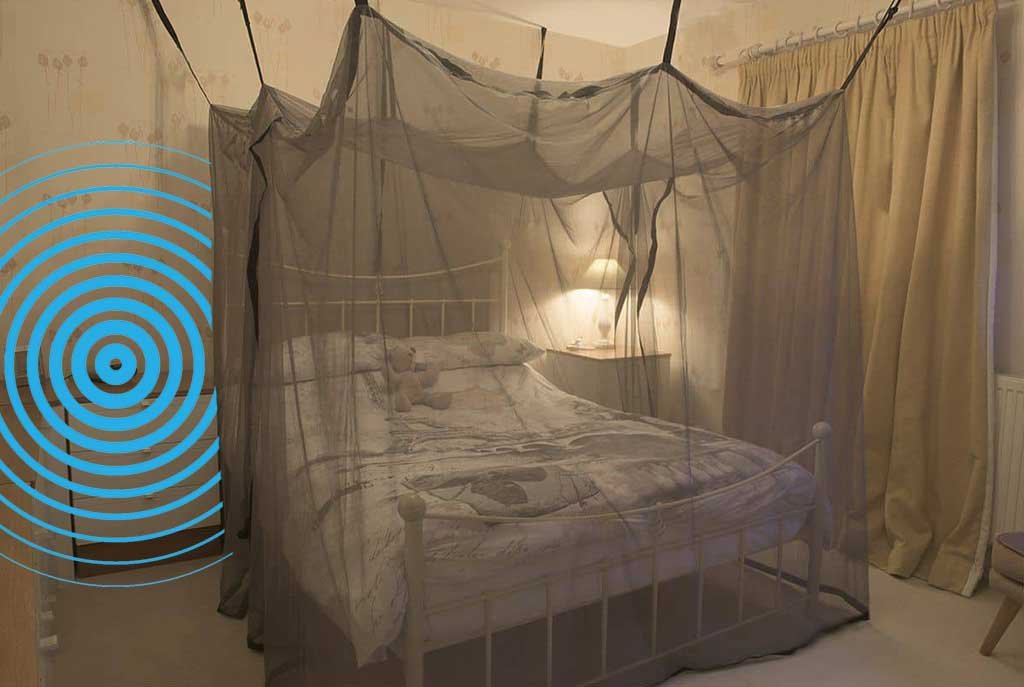 Using a perfect EMF protected bed canopy is the all in one solution for your family members. We have to face too much radiation in the bedroom from cell phones, laptops, tv, gadgets, etc. If you are in the bed canopy, you are safe from every radiation and you do not have to worry about wifi routers in the bedroom. It is now being widely used all over the world. Don’t worry you can get it at a very affordable price (click here). 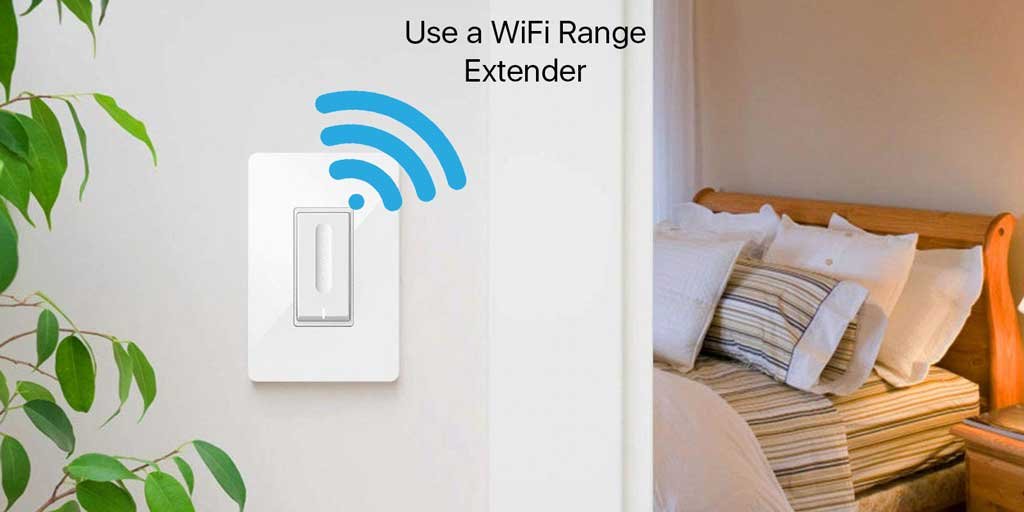 04. Use a WiFi Range Extender

For an average four bedroom house it might be problematic to set the router too far away, especially when there’s an increased number of users. To solve that problem you can use a range extender. They’re commonly available and aren’t expensive either, but will help you lessen the risk of radiation exposure from wifi routers. 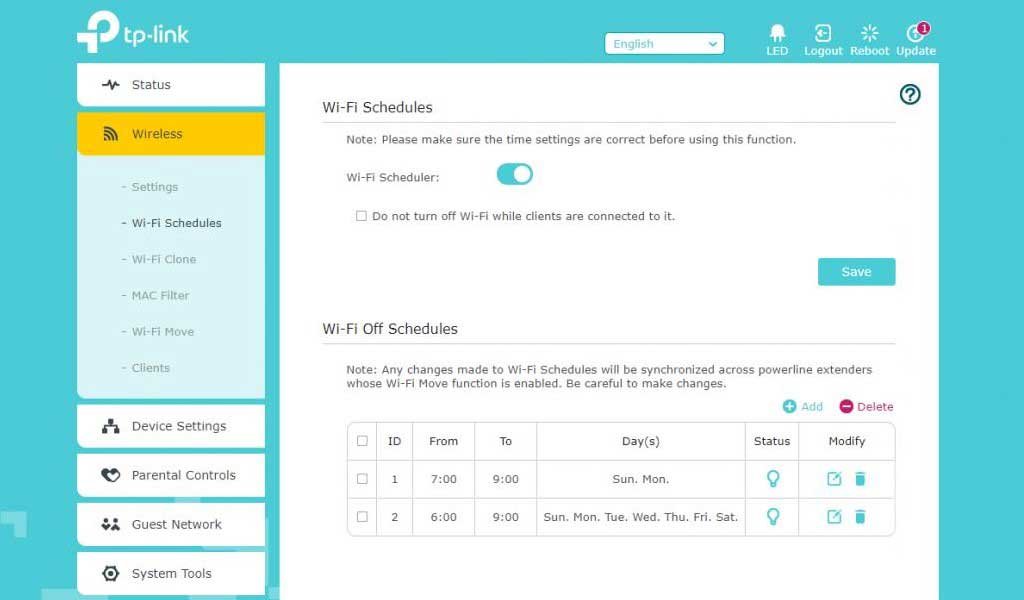 Even with a router guard on it is still better if you turn the router off at night. But if it’s further away from your bedroom, it can be annoying to turn it off before bed and turn it on again after waking up. A good solution for that can be setting up power off and on schedule with a programmable electric timer. 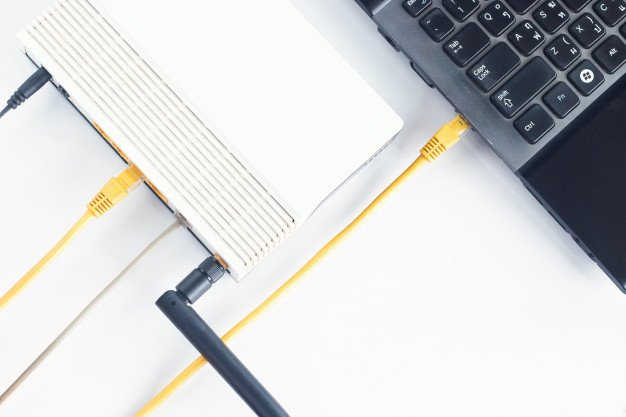 06. Use an Ancient Wired Internet Connection

This is very common, 10-15 people are living in a mess and sleeping close to the wifi routers everyday. Mostly working class people have to face this life daily. If you have nothing to do from the above but to stay with a wifi router in your bedroom, I will recommend you to lower the overall radiation exposure. Turn all electronic devices off or maintain a safe distance as much as possible.

A Modem In Your Bedroom – Is It Safe?

Take Decision to be Safe from WiFi Router EMF

The dangers that wifi routers possess depends on a number of variables, including a person’s age, overall physical health, along with their proximity to the Wifi router, and the duration of their exposure. However, the low gigahertz radiofrequency radiation emitted from wifi routers is not something that’ll affect you in a short period of time, so put your mind at ease from immediate panic. But make sure to take precautions for the long run.